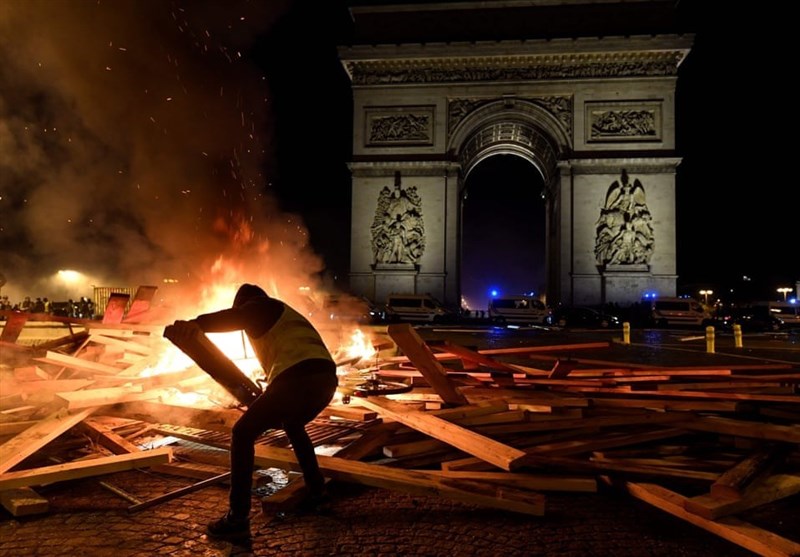 Everyone’s favourite far-right Franco-Serbian-Brazilian paramilitaries have transitioned from the battlefields of East Ukraine to the streets of Paris. Informed sources say Victor Lenta and friends are now street brawling alongside the Gilet Jaunes in France’s long running civil disturbances.

The Unité Continentale boys claim to be at the heart of the fight against Emmanuel Macron’s government. This has led to some alleging the Gilet Jaunes movement is far-right, but it seems unlikely. The movement has a broad reach and includes people from all points on the political spectrum, with a sizeable extreme left contingent and even more from the mainstream middle ground.

Lenta and the others are unlikely to turn the riots into a forum for fascism, or achieve the nationalist revolution they seem to want. But they’re getting a fair amount of publicity. Here’s our regular Serbian commentator with more details.

1.What are Unité Continentale doing in Paris?

Victor Lenta and others returned to France after their time in East Ukraine. He now claims that he spent his time there battling against the fascists of Kiev. This despite the fact he himself was originally expelled from the French army for his involvement with various Nazi street gangs. What is more interesting is that UC guys have teamed up with other French volunteers who were not part of their group but were members of other units like Пятнашка (Pyatnashka), a Russian ‘international brigade’ consisting mostly of men from the Caucasus.

There is something interesting at work here. Most of these men around Lenta are special forces guys and war veterans from many conflict around the world. Articles claim that Lenta is commander on the streets but that real orders come from one of the most dangerous people in Eastern Ukraine: a man called Abhaz.

Abhaz comes from break away Abkhazia Republic in Georgia. He joined the group of volunteers in Eastern Ukraine and soon after became commander of Пятнашка Brigade. During the conflict he became incredibly famous and we can put him in same rank like other rebel war legends.

What is interesting about this commander is that, unlike Motorola, he is a careful tactician who for the most part advances in battle with minimal losses. This is due in part with his obsession about training his men. He often liked to team up with units like Oplot in various combat operations. However in battle for Donetsk airport he supported Motorola’s Sparta Unit and Givi’s Somali Unit. Assistance provided by his international brigade proved crucial time and led to the airport being taken in early 2015.

3. What is his connection to Lenta and the Paris riots?

Abhaz has publicly claimed that he will send reinforcements from his men to the French streets. This is not by any means a joke and if articles are correct about him pulling Lenta’s strings then the situation in Paris is, in my opinion, out of control. We don’t know at moment how many men with military backgrounds are part of protests but from the media reports we can clearly conclude that UC guys and other volunteers are at least flexing their muscles on the streets and possibly commanding thousands of protesters.

4. Is there any proof for this?

Victor Lenta has certainly been seen at Gilet Jaunes demonstrations in Paris during January wearing a red beret and medals. He claims to be the ‘protector’ of the protesters. He was accompanied by several other East Ukraine veterans. How much influence he has on the violence is unknown. Lenta is no stranger to exaggeration.

So far none of his men have come to Paris. It may be just talk. The Gilet Jaunes movement is unlikely to be sympathetic to either Lenta or Abhaz trying to take control or using the riots to boost their own profile.

Some claim that the presence of Lenta and the others in Paris is proof that Russia is manipulating the situation. It’s possible, but then many other countries are probably trying to do the same, no doubt to mutually contradictory ends. Right now Paris is a mess of conspiracy theories, yellow jackets, and burning barricades. Let’s wait and see what happens.

If you want to show some love for this free blog then buy my books in paperback, hardback, or ebook:

One thought on “Unité Continentale in the Paris Riots”