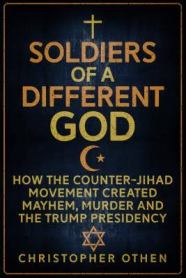 If you’re looking to make sense of Donald Trump’s election, Tommy Robinson’s arrests, and the rise of nationalism across Europe then my book on the counter-jihad movement will be available from Amberley on 15 August.

Soldiers of a Different God is the first book about how an unlikely anti-Islamic alliance of gay activists, feminists, fascists, evangelical Christians, populist politicians, and surfing rabbis from California fuelled the rise of the European hard right and gave us President Donald J Trump. You can reserve your copy on Amazon [and on Amazon.com] today.

Here’s a deep dive into what the book’s about:

Soldiers of a Different God

Not long after 9/11 what would come to be called the counter-jihad began to stir in a primordial soup of internet newsgroups, newspaper opinion pieces, and the new online blog format. Soon sites like Gates of Vienna, Jihadwatch, Little Green Footballs, and Atlas Shrugged were warning the world that Islam posed an absolute threat to democracy and freedom. ACT! for America fought against sharia law on the home front. Over in Britain, journalist Melanie Phillips told her readers that Muslim immigration was creating Londonistan.

The establishment’s first instinct was to blast the movement as a Trojan horse for the far-right. Reality was more complicated. Counter-jihadism had created an unlikely coalition: homosexuals opposed to Islamic prejudice, conservative Jews who saw genocide in Muslim hatred of Israel, feminists unable to reconcile their freedoms with Islam, populist politicians looking for an easy road to power, and working class patriots happy to beat foreigners back into the sea. Fellow travellers like French novelist Michel Houellebecq and German thriller writer Akif Pirinçci shot like comets over the skyline, their personal obsessions matching orbits with counter-jihad beliefs. The movement had no formal structure and no central command, although many prominent figures knew each other. All believed the West was cutting its own throat and using Islam as the blade.

The core of counter-jihad thought was simple. Islam could never be compatible with Western values. The faith had too much homophobia, misogyny, and anti-Semitism; too little separation of church and state. It was a clash of civilisations amplified by globalisation and population drift. Birth rates and immigration would soon make Islam dominant in Europe and possibly America, a cultural takeover enabled by corrupt governments and applauded by privileged liberals blind with political correctness.

Some counter-jihadists spiced up their message with Oswald Spengler’s ideas of civilisational decline, projecting images of Rome falling to the barbarians on to the decadence of the modern West. Others gave the villain’s role to capitalism, a vampire squid sucking up low wage workers from the Third World to spray over Europe. Most blamed weak-willed liberals with too much money and the naive belief Muslims liked voting for them in elections. No-one could agree on a cure. Solutions varied from ending Islamic immigration, forced deportation, calls for a new patriarchy, public displays of sexuality, educational programmes, better security vetting, and a fresh crusade to retake Constantinople.

The success of the English Defence League turned this movement of bloggers and authors into an army of street activists. By 2010 journalists were reporting on 10,000 strong marches. Similar anti-Islamic movements blossomed across the West. The Norwegian Defence League, Hooligans gegen Salafisten, Stop Islamisation of Europe, the European Freedom Initiative. Then a murder spree by unbalanced Norwegian supporter Anders Breivik brought down a media storm and disillusioned many.

The movement resurrected itself when the Arab Spring gave birth to the Syrian Civil War. The Islamic State movement carved out a Caliphate that found supporters around the world. A wave of terror attacks hit Europe and America: the Charlie Hebdo murders in Paris, the Nice truck attack, the Fort Hood shooting, the Pulse nightclub massacre. The migrant crisis turned up the heat when millions rushed the borders of Hungary and Greece. France’s Front Nationale and Germany’s Alternative für Deutschland became the best known political parties at home and abroad by adopting counter-jihad policies.

Prominent American counter-jihad bloggers got jobs writing for Breitbart News, a right-wing news outlet that liberal critics thought too close to the transgressives of the alt-right. Senior people at Breitbart had the ear of a New York billionaire considering a run in the 2016 presidential election. The grassroots movement of ACT! for America offered support if their policies became law. Donald Trump would face off against Hillary Clinton with a campaign promise to stop Muslim immigration that had the counter-jihad cheering.

Find out the full story in Soldiers of a Different God [or amazon.com] by Christopher Othen, out on 15 August 2018.