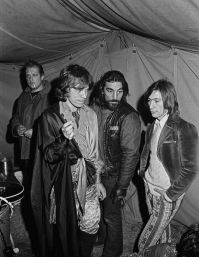 Ok, Charles Manson wasn’t at Altamont. He was already in police custody after an October 1969 raid on the Spahn Ranch for car theft. They booked him under the name “Manson, Charles M., aka Jesus Christ, God”.

One of the gang talked and soon the press knew Manson had ordered the murders of Sharon Tate, Gary Hinman, and too many others. The hippy dream was souring fast. Then a 6 December free festival at the Altamont speedway track in California ended with Hells Angels stabbing a man to death. It was a custom-made metaphor for the end of the love-and-peace era.

But there is a connection between Manson and the Altamont festival. One of the Hells Angels doing security at the festival was 35-year-old Bill “Sweet William Tumbleweed” Fritsch. He can be seen in film footage arguing over the microphone with members of Jefferson Airplane after Angels beat back concert-goers trying to climb on stage. Later he tried to calm people when the Rolling Stones halted their set during Sympathy for the Devil. A few songs after, 18-year-old African-American Meredith Hunter, high on meth, pulled a gun on the Angels. He was stabbed to death.

Fritsch was an acquaintance of Bobby Beausoleil, a member of the Manson Family. Both men appeared in Kenneth Anger’s occult art film Lucifer Rising. Or at least in the original attempt to film it before Beausoleil dropped out and Anger re-purposed the footage into Invocation of my Demon Brother. Beausoleil was the first Manson follower to be arrested. Police caught him trying to escape the Hinman murder scene on 6 August.

Sympathy for the Devil 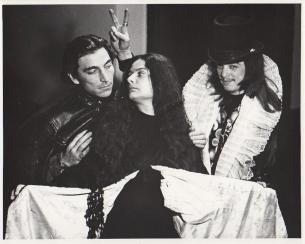 and gossip-monger Anger provides another link to the Rolling Stones. He hung out with them in London, having been introduced by art dealer Robert Fraser. Anger’s occult interests provided one of the inspirations (along with Bulgakov’s The Master and Margarita) for the song Sympathy for the Devil. Which the Stones were playing when thing first started to go wrong during their set at Altamont.

Bill Fritsch was originally a poet on the San Francisco scene who became part of the Diggers, proto-Hippy community activists. He had a “a left-wing, longshoreman, Communist Party, good Jewish boy, Jewish progressive radical from Brooklyn, background” according to a fellow Digger. Fritsch shook that off and had joined the Hells Angels by 1967. He was around in London late the next year when The Beatles were recording the White Album, which featured the track Helter Skelter, a big influence on Charles Manson’s apocalyptic worldview.

Then Altamont, a last minute venue for a scrappy free festival where the Hell’s Angels were paid in beer to control a rowdy crowd. And things went badly wrong.

Fritsch got shot in the head a few years after Altamont in some Angels dispute and left partially paralyzed down the left side of his body. He can be seen reading a poem at The Band’s 1976 final concert, limping on stage at Winterland with a cane. He died in 2015.

George Lucas, future creator of Star Wars, was also at Altamont as a cameraman for the documentary shot that day. But that’s another story.

For more warlike weirdness, you can buy my  books in paperback or ebook: